Atlantic Council Has Discussion About the Nuclear Posture Review 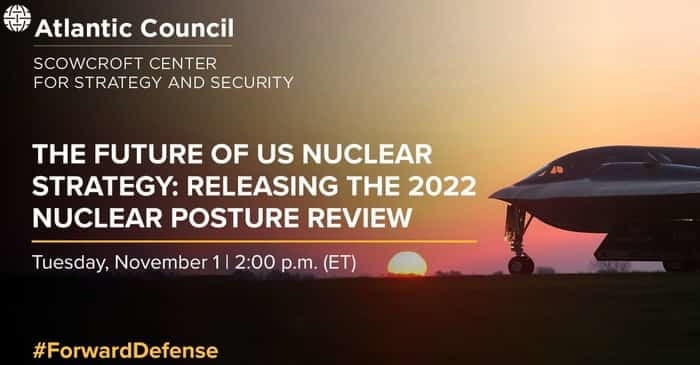 On Thursday Oct. 27, the Defense Department released the public versions of three strategic documents — the National Defense Strategy, the Nuclear Posture Review and the Missile Defense Review — after having developed both the classified and unclassified versions of all three in conjunction with one another.

During a discussion today the Atlantic Council, Richard C. Johnson, deputy assistant secretary of defense for nuclear and countering weapons of mass destruction policy, participated in a fireside chat regarding the Nuclear Posture Review at the Atlantic Council.

The NPR offers a range of options for nuclear threats of all types on the United States as well as on allies and partners.

There are three nuclear triad legs. Ground-based intercontinental ballistic missiles can be quickly launched, if needed. The submarine delivered weapons are very survivable, and the strategic bombers are visible and recallable.

"One of the most important aspects of this 2022 NPR is that we see it as comprehensive, and we see it as balanced. We think that there is just as much discussion in this document about the importance of nuclear deterrence, about our modernization of our nuclear triad, and also about things like arms control, risk reduction, strategic stability — all things that this administration has said they want to regain the leadership role in," he said.

"The Chinese nuclear force, which is a new and important factor that we have to take into account that we haven't had to think about in previous nuclear posture reviews, the document makes very clear that we are now facing potentially the rise of two nuclear armed competitors that we're going to have to take into account, whether it's from a deterrence perspective, or from an arms control perspective," he said, noting that the first NPR was in 1994.

The U.S. is extremely concerned to see the construction of two fast-breeder reactors in China that could create a lot of plutonium for use in nuclear weapons, as well as the reprocessing facilities that would extract the plutonium, Johnson said.

The Chinese could be working through the International Atomic Energy Agency or other means to be more open about whether their plutonium stocks are for civilian or military purposes, he said. There’s a lack of transparency on their part.

The other nuclear-armed competitor is Russia. There are concerns not only with Russia's illegal invasion of Ukraine, but also its irresponsible nuclear rhetoric, he said.

"Any use of a nuclear weapon would have a strategic effect and would fundamentally change the nature of a conflict," he said.