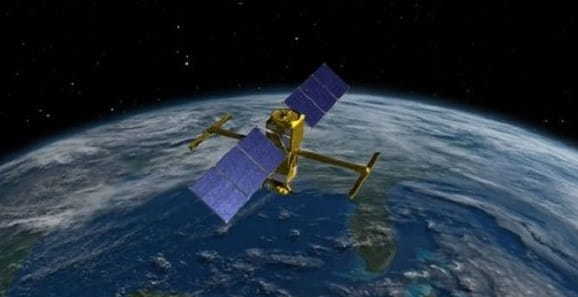 More than 3,000 solar cells will power the Surface Water and Ocean Topography (SWOT) satellite, as the internationally led mission conducts the first global survey of water on the Earth’s surface.

As the SWOT mission starts its survey of the Earth’s surface this month, the satellite will obtain power from solar cells built by Spectrolab, Inc., a wholly owned subsidiary of Boeing [NYSE: BA].

The SWOT satellite, targeted to launch this month from Vandenberg Space Force Base in California, will conduct the first global survey of water on the Earth’s surface, observe the fine details of the ocean’s surface topography, and measure how water bodies change over time.

The spacecraft will be powered by a six-panel solar array, containing a total of 3,360 of Spectrolab’s NeXt Triple Junction (XTJ) solar cells. These advanced cells pull power from multiple wavelengths, allowing higher efficiencies not possible with commercially available silicon solar cell technology.

From a unique, non-sun-synchronous orbit, SWOT’s instruments will measure the height of water in the planet’s lakes, rivers, reservoirs and oceans in higher definition than ever before. The data will help NASA and its partners at the Centre National D’Etudes Spatiales (CNES), the Canadian Space Agency and U.K. Space Agency, inform water equity and water management decisions, provide new insights into Earth’s water and energy cycle, and help to prepare communities for rising seas and changing coastlines in a warming climate.

The SWOT mission will be managed by NASA’s Jet Propulsion Laboratory, which provided the science payload and its instruments. Spectrolab’s solar cell work was done for Thales Alenia Space, which was contracted by CNES to manufacture the satellite bus and conduct the final assembly, integration and test.

“Our Spectrolab team knows our efforts to power space programs improve life on Earth. Learning more about our changing planet is key to that mission,” said Tony Mueller, president of Spectrolab. “We’re excited Spectrolab solar cells will be powering the first spacecraft to survey nearly all water on the Earth’s surface.”