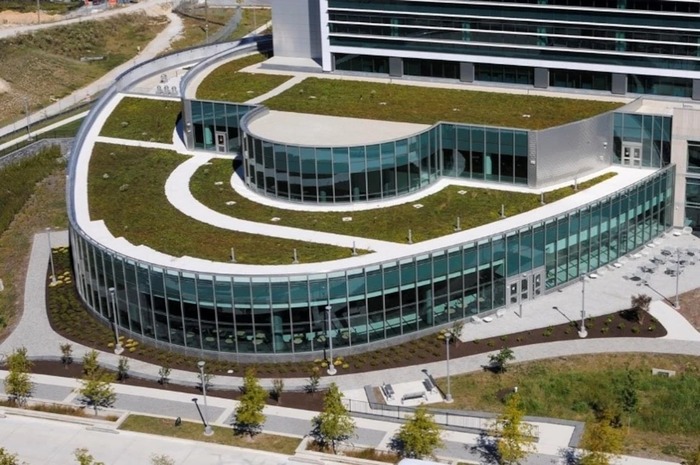 Serving as the hub for NSA’s most critical missions well into the future, this innovative, state-of-the-art facility will soon become home to the National Security Operations Center (NSOC) and many more vital elements.

Designed to enable the NSA workforce to solve some of the nation’s most complex challenges, the seven-story Morrison Center is equipped with many next-generation amenities — including a multipurpose conference center, modern fitness center, and much more.

A Center for All

The Morrison Center is no exception to NSA’s ongoing commitment to facilities that are accessible and useable for all employees, regardless of ability.

During the design and construction phases, project management maintained a strong emphasis on accessibility beyond the requirements of the Architectural Barriers Act, integrating touchless door activators for the first time ever at an NSA facility.

“Ideally, everything we design should be accessible to everybody,” said Ben Bates, the Morrison Center project director for accessibility and inclusion and Diversity, Equity, Inclusion, and Accessibility ambassador.  “That’s the goal of accessibility in general, not just for facilities, but everything NSA does.”

Continuing the partnership with NSA’s People with Disabilities Employee Resource Group (PWD ERG), the Morrison Center project managers welcomed members of the PWD ERG to the new facility months before opening to evaluate the design and amenities.

One of our campaigns is ‘Accessibility is not an Afterthought,’ that’s why it was important for us to do this while they were still constructing the facility,” said Brent Hare, PWD ERG co-chair, who attended the Morrison Center evaluation alongside ERG members with varying abilities — including blind, deaf and hard-of-hearing individuals, users of both manual and power wheelchairs, and those with limited mobility using assistive devices.

“We all had unique and valuable inputs resulting in permanent improvements that everyone will benefit from,” Hare said.

The Morrison Center is also setting a new NSA standard to have a gender-neutral single-occupant restroom available everywhere in the building where there are men’s and women’s restrooms.

“The agency set a standard for gender-neutral single-user restrooms to address two issues: to provide a facility for persons with a need for greater privacy — such as tending to medical issues, changing attire, or for those who simply may have privacy concerns; and to respect those who may not feel comfortable in a gender-specific environment,” Bates said. “The single-user restrooms are accessible and available to anyone and everyone as a matter of personal choice.”

The Morrison Center also incorporates elements that add a new dimension to employee wellness and underscore NSA’s investment in people, including modernized sit/stand desks, a 24/7 open-concept cafeteria designed to help fuel the critical missions being housed in this new facility, and larger windows.

As climate considerations are an essential element of national security planning, the Morrison Center is an example of NSA working toward greener environments that promote conservation and reduce environmental impact.

“The Morrison Center will increase water and energy efficiency, reduce waste, and promote sustainable construction for the future of the agency,” said Jim Maley, NSA’s chief sustainability officer. “Sustainable agency buildings are good for the environment and good for the mission.”

NSA’s environmental efforts during design and construction not only set the standard for campus sustainability going forward, but help protect the largest estuary in the United States: the Chesapeake Bay.

Green infrastructure can be found across East Campus, with native plants to help promote biodiversity and drought-tolerant vegetation to help filter runoff to protect the Chesapeake watershed.

While some sustainable features benefit the environment outside of the building, the Morrison Center also features a “green roof” on top of the cafeteria, with plants that provide heat dispersion and help keep the building cooler.

Moving inside the facility, sustainable elements have been integrated into the building’s foundation and operations to practice good stewardship of the natural environment and provide a safe, healthy place to work. These include low volatile organic compound (VOC)-emitting floors and furniture to improve air quality and a building cooling system that is fueled by reclaimed, treated wastewater.

As digital threats to our nation and allies continue to rise, the Morrison Center is designed to enhance NSA’s ability to defend national security information systems and protect our nation’s critical data.

“The creation of state-of-the art facilities provides environments that cultivate collaboration and overall employee wellness, ensuring that our people have what they need to succeed,” said Matthew Boren, chief of NSA’s Military Construction office.

With sky bridges that will connect the Morrison Center to the Integrated Cyber Center and future East Campus buildings currently in development, the new facility encourages collaboration between organizations.

The state-of-the-art facility was also intentionally designed with floors, walls, ceilings, and furniture that enable easier upgrades of information technology. “The Morrison Center has the ability to support the mission of today and tomorrow by designing not only to current technology, but possible technology to come,” said Mike Fisher, Morrison Center project manager. 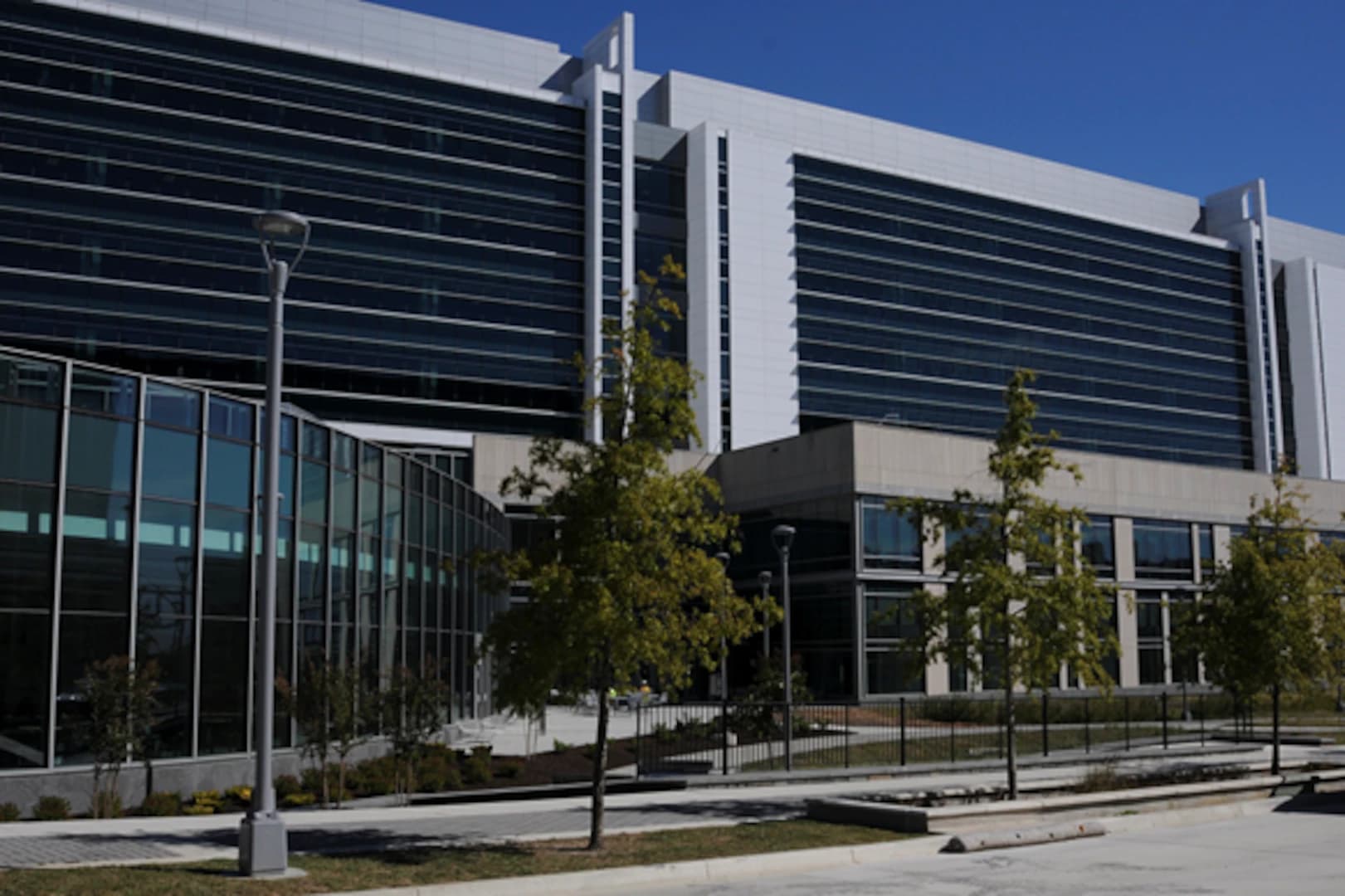 A Nod to NSA’s History

The Morrison Center is named in honor of Maj Gen John E. Morrison — a Cryptologic Hall of Honor inductee who served as head of NSA’s signals intelligence organizations in the late 1960s, and is known as the founding father of the National Security Operations Center (NSOC).

Morrison recognized the need for a unified crisis-response center after the downing of a Navy EC-121 reconnaissance aircraft by North Korean fighters in 1969.

In July 1969, he proposed the establishment of a single national signals intelligence watch center — a centralized space to coordinate a rapid, holistic NSA response. NSOC was established by formal charter in 1972, and the official ribbon cutting ceremony was held on 21 February 1973.

“Over the past 50 years, that center has never slept,” GEN Nakasone said.

A world-class, next-generation facility that will house the very crisis-response center Morrison envisioned nearly five decades ago, the Morrison Center truly embodies the operational excellence that NSA is known for across the globe.

To start a career journey at NSA, visit NSA.gov/careers or intelligencecareers.gov/NSA for more information on employment opportunities.