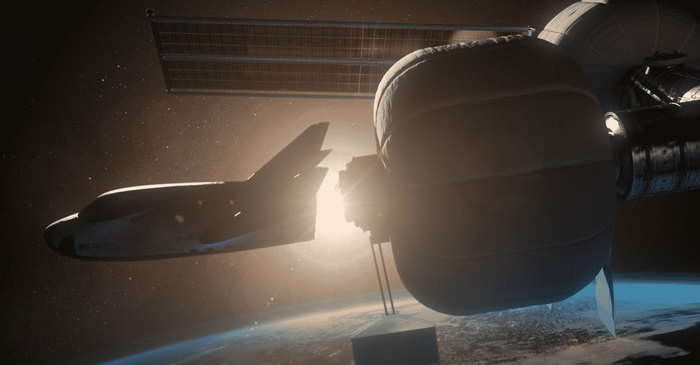 This latest UPB test (photos of the test below) was performed on November 15th under NASA’s NextSTEP project for space habitation systems, which is managed by the agency’s Marshall Space Flight Center. NASA subject matter experts and ILC Dover collaborated with Sierra Space on the test, which occurred in a historic setting on Redstone Arsenal in Huntsville, Alabama. Due to the explosive nature of the test, the team placed the sub-scale space habitat in the flame trench of the Saturn 1/1B test stand, where NASA tested rockets for the Apollo program.

Sierra Space’s LIFE forms part of the company’s in-space destinations technology portfolio. The inflatable module, currently in development at NASA’s Kennedy Space Center in Florida, is a three-story, commercial habitation and science platform designed for LEO that will allow humans to live and work comfortably in space. LIFE is constructed of high-strength “softgoods” materials, which are sewn and woven fabrics – primarily Vectran – that become rigid structures when pressurized.

Sierra Space is working toward NASA softgoods certification and is already exceeding programmatic requirements that demonstrate LIFE has followed a successful systematic and comprehensive design, fabrication and test program. The two sub-scale UBP tests in July and November achieved a maximum burst pressure rates of 192 and 204 psi, respectively. Exceeding the safety requirement of 182.4 psi demonstrates that Sierra Space can meet the 4x safety factor required for softgoods inflatables within its current architecture at one-third scale.

This series of sub-scale tests is designed to support LIFE’s overall, full-scale development and future inflatable habitats, as Sierra Space builds the next generation of inflatable habitat architectures. These early “fleet” leader tests provide the design and analysis data to determine the safety and reliability of the inflatable architecture systems.

For NextSTEP-2, Sierra Space is focused on performing critical risk reduction tests and assessing LIFE’s extensibility to multiple space destinations including the moon and Mars.

Among other missions in coming years, LIFE will serve as both a habitation and a payload element for the Orbital Reef commercial space station, a collaboration between Sierra Space and Blue Origin.

“The LIFE habitat module is essential technology for enabling humans to safely and comfortably begin to develop new civilizations in space,” said Sierra Space CEO, Tom Vice. “This project will service many different opportunities for the new space economy, and the results of this most recent test and milestone are testament to the progress our team is making to enable the next chapter in space commercialization. We look forward to continue building this key element in our technology portfolio and paving the way for the development of advanced inflatable habitat systems and architectures.”

“Sierra Space is making incredible strides in the inflatable habitat technology development roadmap. In working with our partners ILC Dover and NASA, Sierra Space is quickly moving closer to softgoods certification,” said Shawn Buckley, LIFE Chief Engineer and Senior Director of Engineering at Sierra Space. “This second successful UBP test proves we can demonstrate design, manufacturing and assembly repeatability, all of which are keys areas for certification.”